Beyond Binary: Infusing Humanity into Innovation

The rumors are true. 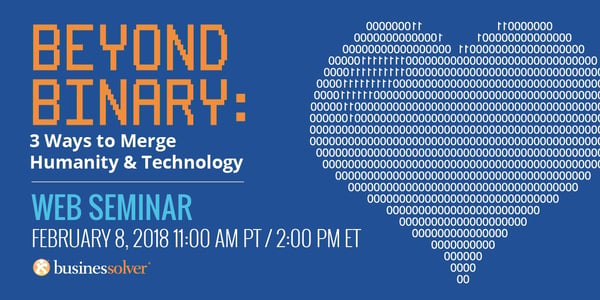 Data scientists – particularly ones that work in tech-dominant Seattle, like I do – are pretty left-brained: logical, analytical, objective. We generally think in numbers and figures, and yes, we drink a lot of coffee. But that doesn’t mean we can’t create technology that is empathetic.

As the lead for Businessolver’s applied data science team, I’m fortunate that my work still allows me to fully engage my right brain as well – the part that’s intuitive and thoughtful. It was this great left brain-right brain convergence that led to our year-long effort to create Sofia℠, your personalized benefits assistant.

Without getting too far into the science of it, creating a chatbot isn’t terribly complicated. And if that’s all we wanted to develop, creating Sofia wouldn’t have taken a full year. However, we set out to create something far more ambitious than a chatbot. What makes Sofia special – and truly innovative – is that we wanted people who interact with her to do so as if she were an actual person. That’s why she tells jokes, responds to people in their preferred language, recognizes patterns so that she remembers the names of users’ spouses and children – just like you’d expect from a human being.

One of the team’s favorite stories about Sofia is a member who chatted with her for several minutes about her child’s field trip and other stressful parts of her to-do list that day, before asking for assistance with a benefits issue. When we reviewed the transcript, it read as if it were a conversation between two coworkers. Another member was shocked to learn that Sofia wasn’t human!

When you consider that people won’t use technology at all that they don’t trust, we’re both humbled and gratified by how many people thus far have had such trusted interactions with Sofia. That’s because “Technology with heart” isn’t just a slogan around here: It’s a guiding principle for all of us Solvers. We never forget that our “users” are people with jobs and stresses and worries. That their “dependents” are people, too – children, parents, spouses, partners. And that they’re all relying on our technology not simply to work, but to help them. Sofia helps support our clients and their employees in doing just that, in a way that’s beyond binary and combines the left- and right-brain in the best way.

View all Posts by Sony SungChu